A path through the forest

I managed to get a couple of hours free this last weekend, so I shot off into the Forest. It’s at its greenest right now, and after a shower (of which there were many this weekend) it fairly glistens…

The Forest is full of tales. The tree below for instance, is close to the Lost Pond which is on the edge of Loughton Camp, an iron age fort. This is where Dick Turpin, robber and highwayman had his hideout. There’s probably booty buried nearby, waiting to be discovered. Lots of places to hide such stuff round here! If there were buried treasure under this tree, it wouldn’t be giving up any secrets too quickly. Look how it grips the earth!

Gripping tight to the earth

All these pics are taken in the same area, about a mile into the Forest from Epping. This spot below is probably my favourite in the whole Forest. It’s a stream which twists and turns and coils upon itself. It snakes down through the Forest. And just here there is a beech tree growing on one of the meanders. Will it make it to maturity, or will the stream cut it off? I’ll probably never know as time has its own pace in the Forest, and I won’t be around to see the resolution of this particular race. 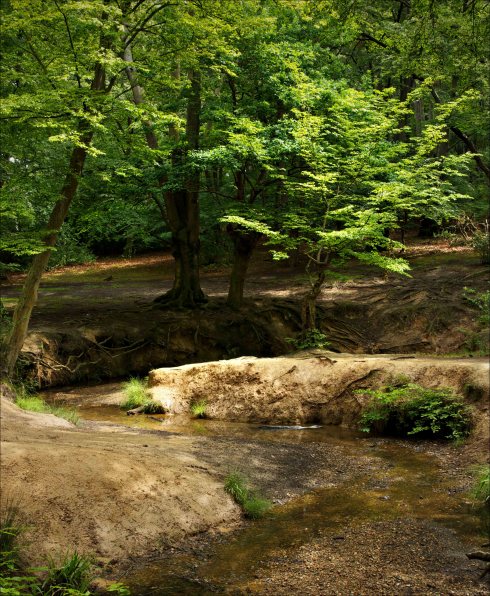 So here’s a little look into Epping Forest. I’ll be back here with more photos later in the year when the colours turn orange and yellow. And stories of Queen Boudica’s stand against the Romans – all in Epping Forest!